I’m shooting timelapse today – a build of an exhibition area. However, the brief posed some challenges that meant my usual kit would not just be inconvenient, but almost impossible to use.

The exhbition area needed to be filmed from high up, but there were no vantage points a person could film from. It meant fixing a camera to a bit of building, then running a cable. There were no convenient power outlets nearby, either. Once rigged, the cameras would be inaccessible until the show was over. The footage would be required BEFORE the cameras were taken down. There wasn’t a limitless budget either.

So… we couldn’t strap a camcorder or DSLR up – how would you get the footage? How would you change battery? Webcams need USB or are of limited resolution. Finally, I settled on a pair of SNC-CH210 ‘IP’ Cameras from Sony (supplied by Charles Turner from Network Video Systems in Manchester). These are tiny, smaller than the ‘baby mixer’ tins of tonic or cola you’d find on a plane. They can be gaffer taped to things, slotted into little corners, flown overhead on lightweight stands or suspended on fishing line.

The idea is that these cameras are ‘Internet Protocol’ network devices. They have an IP address, they can see the internet, and if you have the right security credentials, you can see the cameras – control them – from anywhere else on the internet using a browser. The cameras drop their footage onto an FTP server (mine happens to be in the Docklands, but it could be anywhere). They have but one cable running to them – an Ethernet Cat5e cable – which also carries power from a box somewhere in between the router and the camera. Ideal for high end security applications, but pretty darn cool for timelapse too!

So I’m sitting here watching two JPEGs, one from each camera, land in my FTP folder every minute. I can pull them off, use the QuickTime Player Pro’s ‘Open Image Sequence’ function to then convert this list of JPEGs into a movie at 25fps to see how the timelapse is going. So far, so good.

The most difficult thing, which I had to turn to help for, was the ‘out of the box’ expierience of assigning each camera an IP address. Being a Mac user with limited networking skills, the PC-only software with instructions written in Ancient Geek was of no help. A networking engineer soon had them pulling their identities of DHCP, and other than one mis-set DNS, it was a smooth process to show each camera where the FTP server was, and what to put there.

It was quite a surreal experience, sitting on the empty floor of the NEC with nothing but a wifi connection on my MacBook Pro, adjusting the cameras on a DIFFERENT network, and checking the results from my FTP server somewhere ‘in the cloud’.

The quality is okay, but not spectacular – I’d say it’s close to a cheap domestic HDV camcorder. But at a few hundred quid each, they’ll pay for themselves almost immediately, and they’ll get rolled out again and again. I doubt they would be of interest to the likes of Mr Philip Bloom et al. Notwithstanding that, I just need to sharpen my networking and cable-making skills! 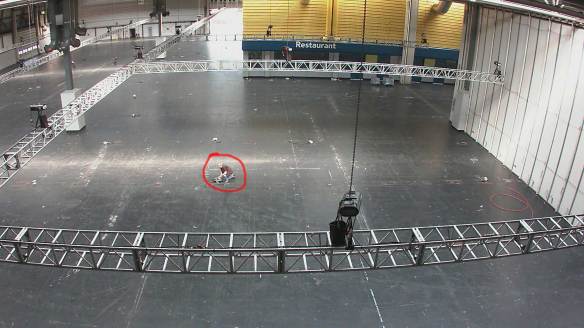