Just back from a manic week, shooting in Beirut, Cairo, then to Cambridge and finally to Edinburgh. We were shooting documentary style, interviews and GVs (General Views) or B-Roll, and Cutaways. The schedules were fluid, the locations unseen, and everything needed to be shot at NTSC frame rates. Immediately, my favourite camera for this sort of job (Sony’s FS100) was out. Secondly, we needed a flexible lighting kit, but all kit needed to be portable, flexible and light.

Even in these days of extremely sensitive cameras, lighting is still an essential part of video work. Even if it’s a bit of addition with a reflector or subtraction with a black drape, you’re adapting the light to reveal shape and form and directing the viewer’s eye to what’s important to your story.

Of course, we can’t all travel with a couple of 7-Tonne lighting trucks full of HMI Brutes and Generators, or even a boxful of Blondes and Redheads. I’ve had a little interview kit of Dedos, Totas and a softbox with an egg-crate, but then these create a separate box of cables, dimmers, plugs, RCDs and stands, and whilst easy to throw in the boot of the car, it’s not exactly travel friendly. 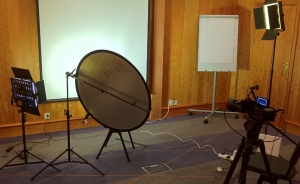 I recently invested in a couple of 1×1 style LED panels, run off V-Lock batteries. These have been a revelation – the freedom to light ‘wirelessly’, and with enough brightness to do a dual-key two-up interview with three cameras has been great. I’ve got the entire kit into a Pelicase with stands, reflector, batteries and charger – but at a gnat’s under 30 Kg, it attracts ‘heavy’ surcharges when flown (and eye-rolls from check-in staff). Then add a tripod bag, then spare a thought for the sartorial and grooming needs of Yours Truly, and the prices go up, as do the chances of something going missing. Also, a stack of pelicases and flight cases lets everyone know that the Media Circus is in town. Such attention isn’t always welcome – especially from those in uniform.

So I’ve been shopping.

I’ve found some little LED lamps on eBay that clip together and run off the same batteries as my FS100. Add a couple of lightweight stands, and the Safari tripod, add a few yards of bubblewrap and a ‘Bag For Life’ full of clothing, all thrown into an Argos cheapie lightweight suitcase. I reckon the case is probably good for three, maybe four trips when reinforced with luggage straps, but getting three bags into one, and doing so under 20 Kg, is a very neat trick. No excess baggage charges, no additional overweight baggage charges, no trips to oversize baggage handling, no solo struggling with four bags… 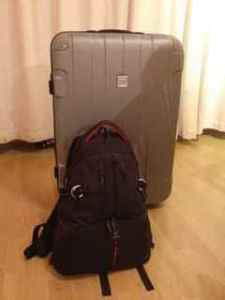 The six LED lamps and three stands allowed for basic 3 point lighting, and their native daylight balance meant that, for the best part, we were augmenting the available light in our locations. Even outdoors, 3 LED lamps bolted together, about 1.5 meters from the subject (and a foot or so above his eyeline) produced a beautiful result. Without the lamp, we’d have ‘just another voxpop’, but with the lamp, with the ability to bring his face up one f-stop from the background, we had a very slick shot. And because it’s all battery driven, we could do this outdoors, we could run around to different locations, and never have to worry about bashing cables – or even finding a power point that worked.

Now, there’s LED, and there’s LED. These were not Litepanels lamps, and there is a little bit of the ‘lime’ about the light. CRI was below 90, which isn’t very good. However, this was easy to cheer up using FCP-X’s colour board, and quite frankly most humans would not see the green tinge until I carefully point it out and do a ‘before/after’ – and even then, my clients weren’t in the slightest bit bothered – just thought I was being a bit of an ‘Artiste’.

We shot on my Canon 550D using the Canon 17-55 f2.8 IS zoom and a Sigma 50mm 1.4 in some of the smaller locations (to really throw the background out of focus). For GVs and B-Roll, the Image Stabilisation was essential for getting shots where we couldn’t take a tripod, or for working so fast a tripod would have been a liability. You’ll have to imagine standing at the edge of Cairo traffic, or wandering through back street markets – or filming buildings next to razor wire blockades guarded by soldiers…

So, the camera could be thrown in a backpack with three lenses, a Zoom recorder, a couple of mics, batteries, charger, a little LitePanels Micro ‘eye-light’ and of course the Zacuto Z-Finder. Everything else, including tripod, stands, lamps and chargers, plus clothing, go in the suitcase.

I really prefer the Pelicase, I love my 1x1s, I’m so glad to be back on the Sachtler head and using an FS100, but I’ve got my ‘low profile’ kit together now. And with the little panels using NP-F batteries (or 5x AAs), clipping together to make a key, or staying separate for background lighting, it’s a very flexible kit.

Two little quotes come to mind: at a MacVideo event a while back, Dedo Weigert (the DoP of Dedo lamp fame) asserted that lighting is not about quantity, but about quality. On a recent podcast, DoP Shane Hurlbut stated, in reaction to the sensitivity of cameras ‘not needing extra lighting’ that it was a DoPs duty to control light rather than to accept what’s already there. I’ve taken both of these to heart with portable LED lamps, as there’s no longer an excuse to shoot without.

PS: I’ll be doing some further tests with the lamps, and intend to make a video from the results.