Following on from their line of successful film making tutorials for Directors, Per Holmes and the Hollywood Camera Work team have launched their new app for iOS/Android and Mac/Windows – Shot Designer.

This is a ‘blocking’ tool – a visual way of mapping out ‘who or what goes where, does what and when’ in a scene, and where cameras should be to pick up the action. For a full intro to the craft of blocking scenes from interviews to action scenes, check out the DVDs, but whilst they can be – and often are – scribbled out on scraps of paper, Shot Designer makes things neat, quick, sharable via dropbox, and *animated*. A complex scene on paper can become a cryptic mashup of lines and circles, but Shot Designer shows character and camera moves in real time or in steps.

You can set up lighting diagrams too – using common fittings including KinoFlos, 1x1s, large and small fresnels, and populate scenes with scenery, props, cranes, dollies, mic booms and so on – all in a basic visual language familiar to the industry and just the sort of heart-warming brief that crews like to see before they arrive on set. 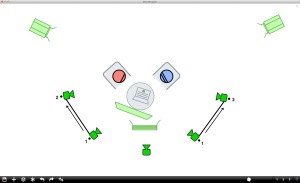 My quick example (taking less time that it would to describe over a phone) is a simple 2-up talking head discussion. The locked off wide is matched with two cameras which can either get a single closeup on each, or if shifted, a nice Over Shoulder shot. A couple of 800W fresnels provide key and back-light but need distance and throw to make this work (if too close to the talent, the ratio of backlight to key will be too extreme) so the DoP I send this to may recommend HMI spots – which will mean the 4 lamp Kino in front will need daylight bulbs. So, we’ll probably set up width-wise in the as yet un-recced room – but you get the idea: we have a plan.

Operationally, Shot Designer is quick to manipulate and is ruthlessly designed for tablet use but even sausage fingers can bash together a lighting design on an iPhone. There’s a highlighter mode so you can temporarily scribble over your diagram whilst explaining it. The software is smart too – you can link cameras so that you don’t ‘cross the line’, Cameras can ‘follow’ targets… It builds a shot list from your moves so you can check your coverage before you wrap and move to the next scene.

Interestingly, there’s a ‘Director’s Viewfinder’ that’s really handy: Shot Designer knows the camera in your device (and if it doesn’t you can work it out), so you can use that to pinch and zoom to get your shot size and read off the focal length for anything from a AF101 or 5D Mk 3 to an Arri Alexa – other formats (e.g. EX1R or Black Magic Cinema Camera) will be added to the list over time. Again, this is an ideal recce tool, knowing in advance about lens choice and even camera choice).

This really is not a storyboard application – Per Holmes goes to great lengths to stress that storyboarding can push you down a prescribed route in shooting and can be cumbersome when things change, whereas the ‘block and stage’ method of using multiple takes or multiple cameras gives you far more to work with in the ‘third writing stage’ of editing. You can incorporate your storyboard frames, or any images, even ones taken on your device, and associate them with cameras. Again, that’s handy from a recce point of view right up to a reference of previous shots to match a house style, communicating the oft-tricky negative space idea, keeping continuity and so on. However, future iterations of Shot Designer are planned to include a 3D view – not in the ‘Pre-viz’ style of something like iClone or FrameForge but a clear and flexible tool for use whilst in production.

Shot Designer may appear to be for Narrative filmmaking, but the block and stage method helps set up for multicam, and a minute spent on blocking and staging any scene from from wedding to corporate to indie production is time well spent. The ability to move from Mac or PC app to iPad or Android phone via dropbox to share diagrams and add notes is a huge step forward from the paper napkin or ‘knocked up in PowerPoint’ approach. It will even be a great ‘shot notebook’ to communicate what the director wants to achieve.

Just for its sharability and speed at knocking up lighting and setup diagrams, Shot Designer is well worth a look, even at $20 for the full featured version. If you combine it with the Blocking and Staging aspect and its planning capabilities, it’s a great tool for the Director, DoP and even (especially) a Videographer on a recce.

Edit: For those of us who haven’t bought an iPad yet – this might be the ‘killer app’ for the iPad mini…