Hooray, Rycote have delivered my Badger wind-jammer! After a week that revolved around filming and editing talking heads and vox pops, it still struck home how aggressive and threatening a Sennheiser 416 can appear to interviewees when it’s hand held for interviews – like having a gun pointed at them.

This will break the ice, it’s cute and fun, and it’s REALLY good in the wind!

So we’re all on the same page, underneath that fake fur is a long microphone ‘pipe’ that’s sort of the ‘telephoto lens’ of the microphone world. If you use it outside, and the merest zephyr of wind plays across this long black thing, it creates a nasty rumble that drowns the interview with rumbles, bumps and that ghastly scratchy ‘audio overload’ interference that completely ruins your audio. So a wind jammer is Sine Qua Non outside, but can be redundant inside. In fact, it becomes more of an audio recorder’s codpiece. But in my previous post, I came to terms with why one should use a ‘fluffy’ or a ‘wind jammer’ indoors where it serves no purpose. But I digress.

Rycote will make you one to special order – no extra cost (thanks, guys!) but of course you’ll have to wait for it. Sure there’s skunks and zebras, but I like the badger – and especially considering that Rycote are in Gloucestershire, which was the epicentre of the Badger Cull Debacle – so, I feel this is in memoriam of the Badgers Who Fell.

To be clear, the badger effect only comes on strong at certain angles. This is not an anatomically correct badger. Don’t expect this to pass muster at a children’s puppetry party. But that’s the strength. It ‘hints’ at badgerness, but it’s still actually a proper pro-level bit of kit that will allow you to shoot outside with sensitive mics.

It’s not frivolous – just a little nod to those who get the joke. Of course, if I were shooting a drama or a difficult investigative journalism piece, this is not the thing to bring. But I shoot corporates. I shoot shiny, happy video full of shiny, happy people, and I’m looking forward to interviewing people with it. It? Him? Her? Should one name it? Or is that going too far?

Yes. It is. It’s just a socially acceptable iteration of the dead cat.

Many cameras allow us to dial in a specific colour temperature for a shot, rather than manually set it with a white or grey card. It sounds good, but can deliver alarming results.

Consider these two images shot under different lighting systems. In both cases, I’ve put a daylight Dedo DLED-4 over the shoulder as a sort of 3/4-backlight-kicker thing. It’s a look I like. That’s a fixed constant. I like to light to 4500 ºK which gives me wriggle room over colour temperature, and is a piece of cake with a bi-colour device like the Dedo Felloni. I had to shift the camera to 5600 to match the lighting sources with my cheaper LED panel lamps.

Immediately, you can see that the Non-brand LED panels are green. Not just a little, green, they are Incredible Hulk Green. Note the daylight highlight on Rick’s temple – its about the same in both images, though I did use 5600 ºK on the F3 for the Non-brand LEDs. I tried using half CTO, but the results were absolutely hideous.

Both images are from LED sources and are untouched in terms of grading. The Fellonis are neutral, accurate and appear to all intents and purposes to be full spectrum. I also find the diffusion and fill tweaks to be particularly nice, considering the cramped location and speed at which we had to work.

So it’s plain: be careful of setting a colour temperature in-camera – it works well with continuous spectrum lighting, but looks horrible if you use more restrictive sources – especially LED devices from the lower end of our budget. They output a very restrictive light.

But that’s not the whole story.

Let’s do what we’re supposed to do: let’s white-set on a known white reference (not just a bit of photocopier paper). Let’s re-light with our non-brand LED panels. At first glance, hey! It looks good!

Let’s compare with the more ‘continuous spectrum’ Fellonis on the right. Note that Rick’s skin tone on the left is far flatter with a hint of grey and yellow. Note also that the pure daylight source behind him is now casting a MAGENTA light over his hair and shirt – all that green has been neutralised, leaving a nasty Magenta odour hanging about. If we try and cancel that out, it will bring the green back in. Meanwhile, the brighter reds and oranges have been tempered by removing so much green.

The result? There’s an ashen look to the skin. It’s a bit dull. It lacks life. On the right, there’s some flush to the face around and under the eyes. The backlight and his shirt pick up the fresh daylight from the three-quarter back. It’s natural, rather than made up.

But bear in mind that if I were using the Non-brand LEDs in a mixed environment, trying to blend them with existing daylight or tungsten or – egad, even worse – both, the results are just awful. That green tinge is back, and it really doesn’t sit with anything else. I remember vividly a shoot trying to use these No-name panels in a mixed lighting situation, pinning half-CTO and diff over them to try and calm them, and still seeing the green tinge seep through.

Note: look out for the full story (and more) on moviemachine.tv soon.

Canon provide a free plug-in to enable the C300’s MXF files to import directly into FCPX without the need to transcode to ProRes. Many users report that they have no problems with the installation and it ‘just works’. However, other users with similar setups report that they cannot import C300 rushes in FCPX, though it works through Log and Capture in FCP7, additionally Adobe Premiere successfully imports C300 MXF. Only FCPX seems affected, and for a limted subset of FCPX users.

Here’s the typical scenario: having run the xpfm211 installer. FCPX sees the folder structure, even the MXF files themselves, but does not recognise either. This is as far as some users get. For some reason, the installer has completed successfully, we are seeing files, but nothing imports. De-installing and re-installing brings the user back to this situation. Very frustrating.

Trying to track the activity of the installer, we see two new plug-ins highlighted in the MIO/RAD/Plugins folder – CanonE1.RADPlug and CanonXF.RADPlug. The latter would appear to be the ‘magic smoke’ for the MXF format. However, this isn’t working. There’s a second empty RADPlugins folder below – should the plugins be in there?
Moving the plugins

Whilst it may seem a bit ‘cargo cult’ to shift the contents from a RAD/Plugins heirachy to a RADPlugins, it was worth a shot. No, it didn’t work.
Comparing folders with a working configuration

Here’s where it got interesting. I was able to confer with another editor who had a system that did import MXF successfully. The key difference was that he had a CanonXF64.RADPlug folder – not an XF, an XF64. I could not find a similar folder, nor could I make the installer create one. In the end, he just sent me a copy of that folder, and I dragged and dropped it into the same folder I had.
C300 rushes now appear normally

And it worked! It’s pretty obvious because you can see the clips, but also note that the MXF folder heirachy has gone, replaced simply with the usual list of clips on a card or archive.
The Secret Sauce of C300 Import

So this folder appears to be the missing link. Depending on your system, the installer either creates this folder, or it doesn’t. Both of us had the XDCAMFormat.RADPlugin, removing both did not make my installer create this file, the only way was to use somebody elses copy. It would be useful to provide this folder as a download to those who need it, but license agreements seem to forbid this sort of activity – probably for good reason.
It comes down to an issue with the installer, which isn’t written by Canon staff, and so it’s difficult to work out who to alert to the situation. However, as seen here, access to the CanonXF64.RADplug folder cures the problem for now. 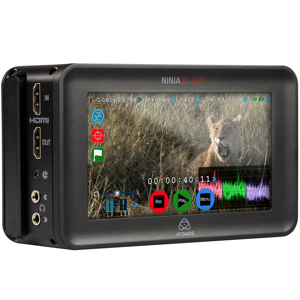 UPDATE: 2:2 PULLDOWN FIXED IN AtomOS 5.1.1…
Early adopters frequently find little snags that are quickly patched, and this week is no different. I have taken delivery of the new Ninja Blade recorder last week.

It’s an awesome piece of kit for the C100 user – but when I record 25PsF, I noticed that the images are shifted two pixels to the left with a black line running down the right hand edge.

Atomos support  have fixed it, they suggest we update to version 5.1.1 here.

As a C100 user, I am very impressed by the Ninja Blade in a number of areas:

Combine all this with very low power consumption, a lightweight chassis and a wide range of media choices, it closes the gap between the C100 and C300.

I’ll do an in-depth review when I’ve cleared my current workload, and I’ll go into a bit of depth over the shot logging facilities which will really make a difference to shooting interviews and long form events such as presentations and conferences.

But not now. I really should be editing! Until then, remember the 50i to 25p trick.

Well, it’s easy to deal with this little inconvenience in PAL-land. If you shoot in 24p or 23.976 PSF mode, you’ll find the same black line, so you’re recommended to shoot in 59.973 and you’re on your own.

With a drum roll and a nod to Abel Cine and all those who got there before me, here’s an Apple Compressor droplet that sorts your Ninja rushes out before you import them: