Alex Gollner and I were shooting some interviews in Berlin this week, and I inadvertently captured the last bit of our setting up which makes a neat little illustration of chromakey lighting. Our brief was to capture the corporate interviews that would fit a ‘white background’ look, but could also get rebranded, so we shot using a chromakey setup.

This may surprise you, but that’s the result from the XDCAM-EX recording. It’s 4:2:0 and recorded internally at 8 bit to SDHC. It’s because the FCPX keyer is a ‘hybrid’ keyer that uses both colour and luminance info to create the key, but it can only work its magic if your source material is good. What does good look like?

First job is to ensure that the background is evenly lit, with no spill onto the subject. Evenness and correct exposure is very important to get a good quality result. The green should be around 50IRE-55IRE on a waveform monitor:

Here, the Waveform Monitor shows the green background nudging towards the 60IRE line, but the key feature is that it’s flat (evenly lit) and the line is thin (not much variance from top to bottom).

Next up, I used a daylight dichroic filter in my Dedo DLH4 backlight to give a cool effect, befitting a white background. Not too much to burn it out, just enough to ‘lift and separate’: 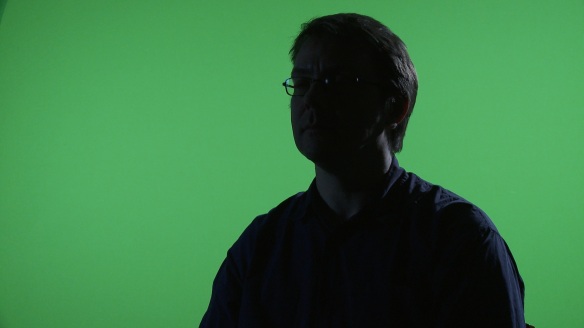 I didn’t feel that was enough, so I moved it a foot or so to the camera’s right. This made it more of a 3/4 back or ‘kicker’, catching Alex’s cheek. 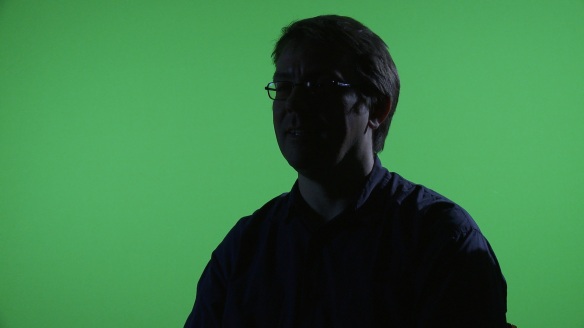 Next, I added a very soft fill. It needed to be more of a ‘wash’ of light and something that could be carefully balanced with the key to provide the right level of ‘ambient’ lighting for a light background. If the fill were low, it would produce a high contrast look better suited to a dark background. We’re shooting for white, so another Dedo DLH4 was beamed into a big white reflector:

Finally, I used a soft key – a small Dedo softbox with egg-crate – above head height. I really don’t like taking the key down to eye level as it looks unnatural. I don’t go too high, otherwise we lose the ‘tings’ in the eyes – the reflection of the light source in the iris that makes the interviewee look ‘alive’. 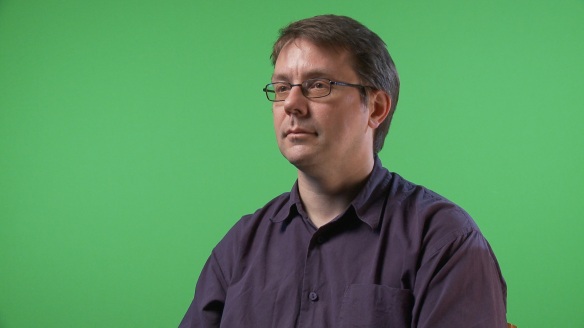 Once in Final Cut Pro X, it’s basically a case of dropping the Keyer plug-in onto the clip. I’ve nudged up the light wrap to create a little false flare around the edges, which introduces another little problem but really helps sell the shot. I’ve reframed accordingly.

Light your chromakey background first. Make sure it’s even and exposed correctly. Your subject should be untouched by the chromakey background lamps, and far enough away from the setup to avoid ‘spill’. Now you can light your subject with a thought to what background it will be used on. Lower contrast for bright backgrounds, higher contrast for dark backgrounds (just a rule of thumb). Update – our dear friend Sean Ebsworth Barnes was shooting stills on the same event and found us doing strange things –

4 thoughts on “Chromakey lighting – the basics”